Recorded in the Domesday Book and believed to be the oldest church in Wensleydale, this has been a place of Christian worship since the days of King Edwin, centuries before the Norman Conquest. Cross heads and 9th century stones can be seen. Some scholars claim it is Anglo-Saxon but it is generally believed the existing building is mostly Norman on Saxon foundations and was built by Alan, first Earl of Richmond and nephew of William the Conqueror, whose steward dwelt in this village. Hence the name Thornton Steward. 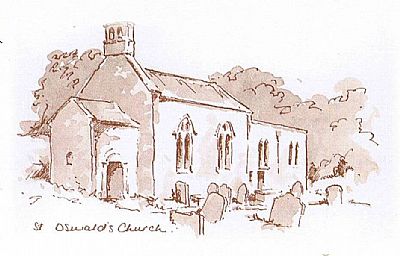 The church stands apart from the present village, possibly because the original village, which may have surrounded it, was wiped out by the plague.

Among many interesting features, spanning the centuries in this superbly situated church, is the Bell Cote containing two bells. Apart from summoning people to worship, bells were rung to announce the births, deaths and marriages of the highest in the land. During violent storms they might be rung in the belief that they would calm the local inhabitants.

Oswald was a Northumbrian Prince, follower of St. Columba and converted to Christianity. Towards the end of the 7th Century he regained the Kingdom of Northumbria (lost by the death in battle of King Edwin). He sent for Missionaries led by St. Aidan, who set up their base on Lindisfarne (Holy Island) near Oswald's Capital at Bamburgh! Oswald translated Aidan's Irish into English as he preached. He was a remarkable, brave man of great initiative who contributed enormously to the Establishment of the Christian Faith in England. He was killed in battle at Oswestry and miraculous healings occurred thereafter.

The Parish of Thornton Steward forms a United Benefice with Middleham, Coverdale and East Witton.  The United Benefice is fortunate indeed to have such an ancient historic church within its boundaries.

(Click here to see a photograph of the church.)